Eighteen months ago sisters Jacqui Wandin and Brooke Collins, descendants of Coranderrk, had a dream. They dreamed of finding a way for everyone, indigenous and non-indigenous, to share with them the beauty and history of Coranderrk Station. With their father, Allan Wandin, they expanded that dream to celebrate the strength and resilience of the original Coranderrk community.

Their dream evolved into the 2013 Festival which commemorated the 150th Anniversary of the founding of the station.  The festival would be built around the celebration of pride and cultural identity.  Even though the people had been forcibly dispersed, 75 years later their spirits remain strong in the hearts of their descendants. A gap in Victorian history had closed when 200 acres of the original 4,850 acres were returned to indigenous ownership.

Barak and other elders wanted a place where Kulin people could feel safe. Imagine the impact of being dispossessed over and over again. Allan, Jacqui and Brooke showed the world that Barak’s dream lives on. For them now, in the 21st century, Coranderrk means having a place where you can feel connected to country and be proud of who you are, a place where both triumphs and tragedies can be commemorated and celebrated.

What a great day the 2013 Festival was! Pride and cultural identity were celebrated.  Descendants, their families and friends were united and reunited and for some it was their first visit to Coranderrk. Families were brought together; extended families were united and reunited. People were able to connect with their history in ways that brought the past to life. It was wonderful a day for all festival-goers – a day of music, stories, laughter and tears. 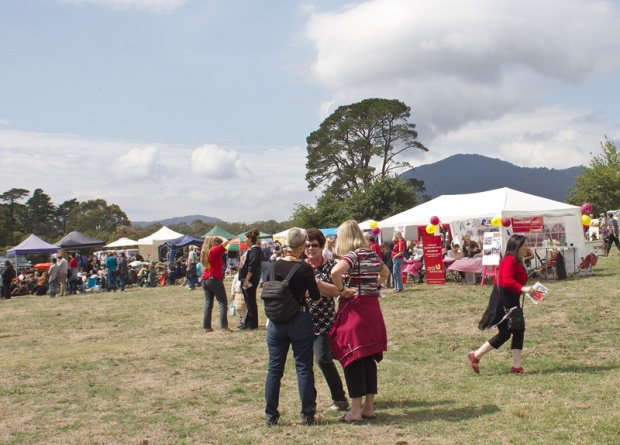 The 2014 Coranderrk Festival will once again give tribute to the dignity and resilience of Victoria’s indigenous people. A warm invitation is extended to everyone, indigenous and non-indigenous, to join descendants of the Coranderrk community in a family day of music, culture and dance, shared photos and stories in the Yarn tent, art and traditional crafts such as basket weaving, ochre-making, children’s activities, food and market stalls.

The music line-up includes singer, musician and artist June Mills from Darwin, Coloured Stone, The Shane Howard Trio, Telecom Joe, Alesa Lajana. The dance program will include The Djirri Djirri Dance Group who are the only Wurundjeri women and girls’ dance group open to all Aboriginal women.  Also dancing will be the Dardee Balagamdail Aboriginal Dance Group, a united group of Aboriginal men and youth who celebrate their strong cultural heritage through the expression of interactive dance.

Everyone is invited to the festival, to contribute to the continuing Coranderrk journey as plans for property restoration and rejuvenation proceed.

Brooke and Jacqui want us all to know that ‘Everyone, indigenous and non-indigenous, is very welcome to attend events at Coranderrk unless otherwise specified.’

They say: ‘Our history is a shared history, let’s celebrate it together!